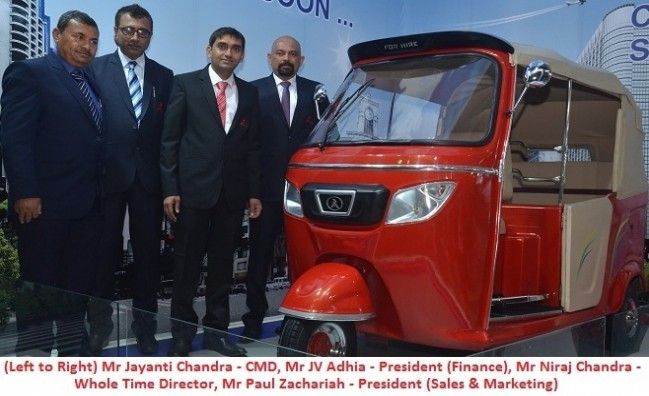 India’s fastest growing three wheeler manufacturer, Atul Auto Limited, showcased its new and premium range of diesel and CNG three-wheeler vehicle yesterday at Auto Expo 2016. The vehicles were introduced under the names, ‘Atul Gem’ and ‘Atul Gemini CNG’. The much awaited CNG three-wheeler Gemini range was introduced to further strengthen its market share and reach new markets. Atul Auto has widened its popularity among the Indian customers by the introduction of CNG commercial passenger products which not only helps in reducing pollution but also provides value for the owner.

Atul Auto also displayed a unique concept auto at the expo and revealed its plans to introduce the vehicle in the near future.

Elaborating further, Mr. Jayanti Chandra, Chairman and Managing Director, Atul Auto Limited, said, “Atul Auto has always delivered value to its customers and stakeholders, focusing on development of various low cost and last mile transportation solutions through its uniquely designed product range. We are already a leading name in the three wheeler space, with the new products we plan to capture substantial market share while offering our customer an environment friendly product which is low on maintenance and cost effective.”

Commenting on this occasion, Mr. Jitendra Adhia – President (Finance), Atul Auto Ltd said, “All products of Atul Auto Ltd are backed with low cost transport solution for common people with its customer centric approach. With all these initiatives company is going to justify its well said tag line Growing Bigger and Growing Better.”

Along with CNG, company has introduced its upgraded products in the form of premium series. With the introduction of CNG three wheelers we would be addressing complete spectrum and all section of the market. From the new plant which is coming up at Ahmedabad, many futuristic products are lined up, witnessed to that, company showcased its next generations proto model during the expo, the unique concept auto. Company’s wide network with 200 dealers and more than 120 secondary dealers’ network along with additional 200 touch points is the core strength for company’s further growth,” said Mr. Paul Zachariah, President Marketing & Sales, Atul Auto.

Atul Auto has an annual production capacity of 60,000 units at its Rajkot plant and has received overwhelming response for its product range “Atul Shakti” and “Atul Gem”, from both rural as well as semi-urban market, collectively selling over an astounding figure of 2,75,000 units. The company offers wide range of diesel and CNG three-wheeler products in both front and rear engine platform for passenger & cargo transportation.