Piaggio Vehicles Private Limited was one of the firsts to bring three wheeler goods transportation concept in India. The Italian Piaggio penetrated the commercial vehicle segment in the year 1999. The company offers a range of cargo vehicles for a variety of applications to suit customer needs in India. The three-wheeler mini trucks Ape Xtra LDX, Ape E City, Ape Auto DX, Ape E Xtra and Ape City Plus are its most popular product. With a reasonable price, it offers excellent mileage and spacious cabin. Piaggio only sells 3 wheelers in commercial vehicle category. The price range of Piaggio Tempos or Mini Trucks starts from ₹ 2.06 Lakh for the most economic model in its lineup, the Ape Auto Plus. The most expensive model in Piaggio lineup is the Ape Auto DX, priced at ₹ 3.54 Lakh. Other products in the category include Porter 1000 and Porter 600 four-wheeler cargo vehicles. The company has already made swift transition from BS-IV to BS-VI now & all the vehicles comply with the latest standards. 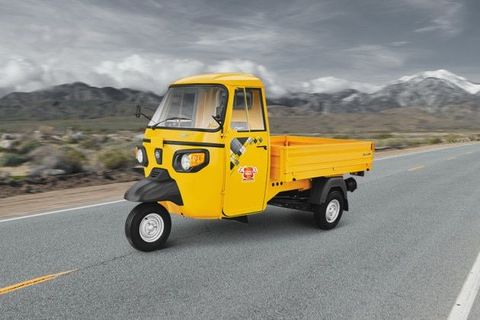 From ₹ 2.84 Lakh*
Get On Road Price
2Variants Matching Your Search Criteria

From ₹ 3.12 Lakh*
Get On Road Price
1Variant Matching Your Search Criteria

From ₹ 2.56 Lakh*
Get On Road Price
1Variant Matching Your Search Criteria

From ₹ 2.06 Lakh*
Get On Road Price
1Variant Matching Your Search Criteria

Piaggio is one of the first Piaggios to introduce the concept of three-wheelers also known as the auto-rickshaw segment as a medium of goods transportation in India. The Piaggio is the pioneer of the very famous and popular commercial vehicle, the Piaggio Ape, which has been used all over India extensively for light cargo transportation over short and long distances.

Known for their unique classic Italian style scooters, Piaggio is one of the major Piaggios in the three-wheeler/auto-rickshaw segment in the country. The Piaggio is originally an Italian company that has been recognised as Europe’s largest scooter and motorcycle manufacturer.

Piaggio has three different areas of specialisation: scooters and motorcycles being their key area, they also focus on light commercial vehicles and a more new and innovative robotics arena. In India, Piaggio is one of the largest sellers of three-wheelers/ auto-rickshaws maker in the passenger and cargo segments.

Piaggio has an extensive vehicle portfolio within a very narrow segment but can be reckoned as extremely diverse. Piaggio’s least expensive vehicle in the portfolio is the Ape E city, starting from ₹1.97 lakhs, with the prices going up to ₹3.55 lakhs for the most expensive product which is the Ape DX. All Piaggio vehicles comply with the latest BS6 emission standards.

The pioneer of the Ape, Piaggio made an impression with its entry into the commercial vehicle market back in 1948. The Piaggio Ape- a three-wheeled light commercial vehicle became a top favourite in the mini trucks segment, establishing the name of Piaggio in the Indian market. The Piaggio focuses on making outstanding mini trucks which are designed and engineered to offer enhanced fuel efficiency and exceptional load-bearing capabilities.

Piaggio is a name to reckon with in the IC engine auto-rickshaw segment with top Piaggioed and popular vehicles including Ape LDX, Ape Xtra, Ape City, and Ape Auto. However, taking a cue from the changing market dynamics, and cater the increasing demand in the emerging e-rickshaw segment, Piaggio has introduced all-electric battery-operated Ape Piaggioed vehicles such as Ape E City, Ape E Xtra. Piaggio is among the top Piaggios entering into the highly growing e-rickshaw segment by offering affordable vehicles and expanding its network across India.

Not just the finest and amazingly capable LCVs, but Piaggio is also known all around India for its unmatched customer care services. They are always ready to guide transporters and truck drivers with the finest solutions and products that meet their needs and reduce their stress. The Piaggio constantly and successfully integrated state-of-the-art technology along with very intelligent workforce management to develop the finest light commercial vehicles.

Piaggio vehicles are not just highly capable and utilitarian but are also perfect for light goods carrying as well as have a very low cost of ownership, addressing the key pain points of the buyers.

Ever since the establishment of Piaggio in the commercial vehicle market, the Piaggio has enhanced its business across 50 countries in the world in very quick succession. Piaggio was earlier known for its iconic scooter, the Vespa. Although, now it has a much more prominent presence in the Asian market not just for its premium scooters for some of the finest LCVs. Piaggio started operating in India in 1999 opening up its first production unit at Baramati near Pune, which primarily focused on the development and manufacturing of the iconic Piaggio Ape.

What is the lowest priced truck model in Piaggio

The Lowest priced model of Piaggio is Ape Auto Plus with the price of Rs ₹ 2.06 Lakh

What is the highest priced truck model in Piaggio

The highest priced model of Piaggio is Ape Auto DX with the price of Rs ₹ 3.54 Lakh

What are the new launches from Piaggio

The latest commercial vehicles of Piaggio are Ape NXT Plus & more.

What are the popular commercial vehicles of Piaggio

How many Piaggio dealers are available in India?