The price range of Bajaj Truck starts from ₹ 1.96 Lakh for the most economic model in its lineup, the Maxima Z. The most expensive Truck in Bajaj lineup is the Maxima C, priced at ₹ 2.84 Lakh also includes Auto Rickshaw and 3 Wheeler. Its most popular models include Compact RE, Maxima Z, Maxima C, Maxima X Wide and Qute. These products along with some others have carved their own niche in the market with their best in class features and powerful performance. 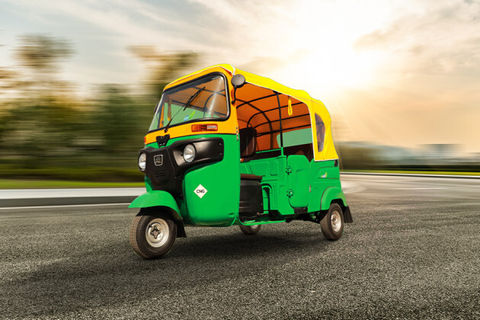 Bajaj is one of the most popular and trusted automobile Bajajs in India. And amongst the Bajaj’s key specialities are three-wheelers also known as auto-rickshaw when it comes to commercial vehicles. Bajaj is the world’s largest three-wheeler manufacturer, and export its range of vehicles across key regions worldwide.

The Bajaj started its venture in the commercial vehicle spectrum with the Bajaj Maxima in the year 2016. A Bajaj known for its affordability all across the country, the Maxima is no exception to the Bajaj’s reputation. The vehicle is one of the most affordable and reliable three-wheeler cargo carriers in India.

Bajaj is the pioneer of the Indian three-wheeler market and successfully dominates it even with intense competition from rivals. Bajaj Auto primarily manufactures three-wheelers and also exports them across many global markets. Bajaj auto-rickshaws are known for their affordability, low cost of ownership, as well as ease of driving.

Bajaj has focused on developing vehicles which follow the emission norms. They have also recently introduced a CNG variant of the Maxima that comes with a BS-IV compliant engine.

Bajaj commercial vehicles, especially three-wheelers are extremely popular across the country. There are a lot of vehicles from Bajaj’s portfolio known all across the country, and some of them include the Compact RE, the Maxima Z, Maxima C, Maxima X Wide and the Qute.

Bajaj auto-rickshaws are one of the most popular vehicles from the Bajaj and they are unmissable all across India.

Millions of micro-entrepreneurs, transporters and small businesses use these three-wheeler vehicles to earn a living.

The key USP of Bajaj has always been “affordability” across all vehicle segments in India. The Bajaj focuses on producing vehicles that are affordable and yet highly utilitarian, with their niche in the market as well as best in class features and exceptional performance. Along with all that, Bajaj is also known for outstanding after-sales service to its customers.

What is the lowest priced truck model in Bajaj

The Lowest priced model of Bajaj is Maxima Z with the price of Rs ₹ 1.96 Lakh

What is the highest priced truck model in Bajaj

The highest priced model of Bajaj is Maxima C with the price of Rs ₹ 2.84 Lakh

What are the popular commercial vehicles of Bajaj

How many Bajaj dealers are available in India?